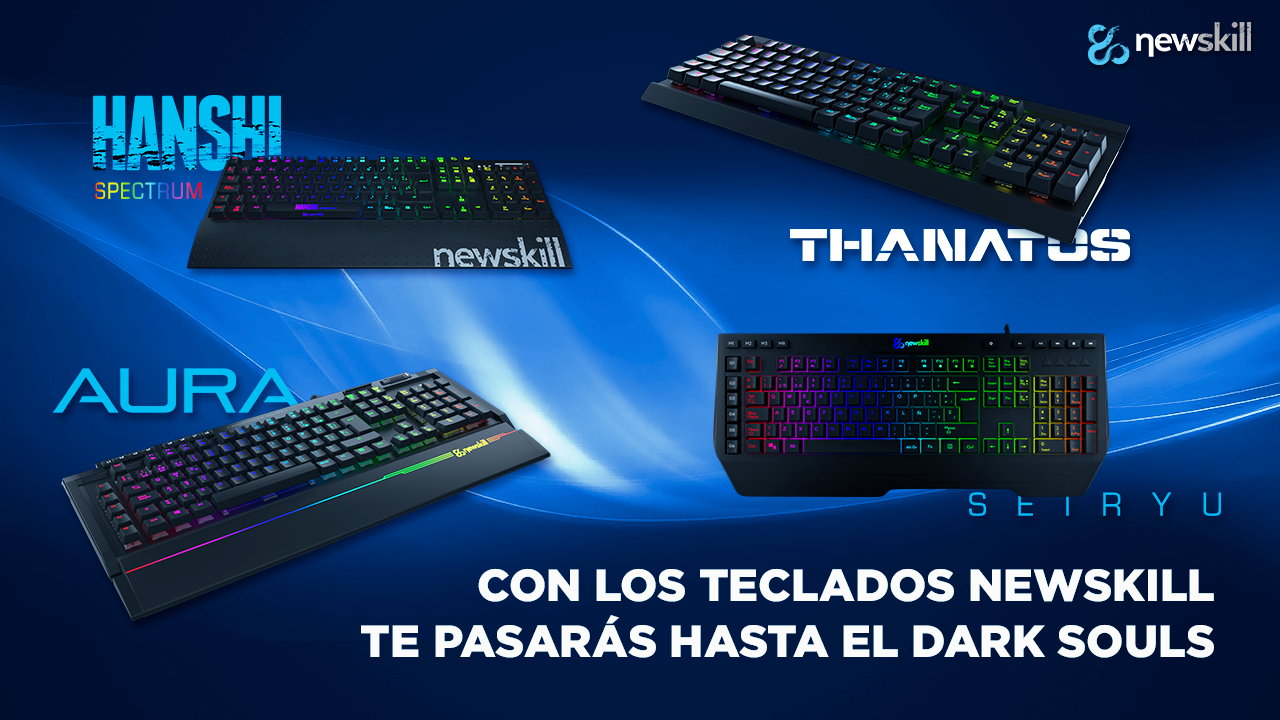 Let's talk about the most important peripheral of our PC, which is none other than the keyboard. Choosing a keyboard is not a decision that can be taken lightly, because the importance of this and the great diversity of existing mechanisms can lead us to get lost.

Mechanical and membrane gaming keyboards are the two main categories of keyboards that can be found wherever you go to buy one. You can find keyboards Newskill of both types. The gaming keyboards type chiclet, or of rubber, are very minority at the moment and focused to very concrete sectors, reason why we will not make much emphasis in them.

Let's talk first about membrane gaming keyboards, since they are currently the most widely used in most areas except gaming. Due to their reduced thickness and short travel, they are especially suitable for laptops and compact keyboards. They are cheaper than mechanical ones due to the simplicity of their mechanism, and their price/quality ratio is usually outstanding. Their lifespan ranges from 1 to 10 million keystrokes.

The operation of these gaming keyboards is very simple. Two sheets of rubber with a printed circuit are superimposed, and only when a key is pressed the circuit is closed, sending the appropriate signal to the PC to interpret the key that has been activated. In our catalog you will find the Newskill Nagashithe Membrane Gaming Keyboard, a spectacular membrane gaming keyboard that allows you to create up to 45 different configurations with five profiles and configure nine keys to execute macros in each of these profiles. The LED lighting of different intensity and our own software put the icing on one of the most revolutionary cheap keyboards.

Within the mechanical gaming keyboards we find our own ecosystem in which everything revolves around the type of switch used. Do not panic, we are going to explain what types of mechanisms exist and which ones are best for you depending on the type of user you are.
They are more expensive than a membrane keyboard, but this is because the quality of a mechanical one is much higher, and its lifespan is up to five times longer. So, if you buy a Hanshi in its classic or Spectrum version, you have a keyboard for a long time.
This type of keyboards are suitable for any type of task, although we will have to choose one mechanism or another. From everyday office work to the most advanced gamer, the different types of switches adapt to all kinds of situations.

Switches are the key actuation systems, and there is a wide variety of them. At Newskill we use Kailh switches for our gaming keyboards, but you may have heard of Cherry MX switches. You're probably wondering, but what's the difference between one switch and another, aren't all mechanical keyboards the same, not at all From the 45 grams of resistance of the Kailh Red to the 80 grams of the Cherry MX Green, there is a wide range of possibilities to choose from.

The higher the resistance of the mechanism, the lower the rate of wrong keystrokes, which is great for playing video games, where speed and precision are everything. On the other hand, if we use this type of keyboard for typing, we will end up noticing fatigue in our fingers. Our gaming keyboards use Kailh switches, another type of switches with a long history in the market and highly valued by gamer and professional users. You can choose between three types of switches when buying a Hanshi or Hanshi Spectrum: Red, Blue and Brown. The differences between these switches are found in aspects such as actuation point, travel distance, operating force and actuation force. Also in whether they are linear, tactile or clicky. Possibly all this sounds like Greek to you, so we are going to explain what each of these characteristics is.

The linear switches are the simplest, since they do not incorporate any type of mechanism that warns us when we have reached the actuating distance, the biggest difference with the linear switches. The tactile switches of the gaming keyboards have a small notch that alters for a moment the pressure that we must exert to continue pressing the key, it is at that moment when it reaches its actuation point. Clicky keyboards have a very characteristic combined system of parts known as double click or click-clack. This is because when you press them, a click sounds when you reach the actuation point and another one when you reach the end of the switch.

The actuation point is the minimum distance that the key on your gaming keyboard must travel to register the keystroke. This distance is 2 millimeters on the Kailh Red and 1.9 millimeters on the Brown and Blue models. In all our Kailh the maximum distance is 4 millimeters, and this distance is the one that the key must travel until it reaches the bottom of the switch. As you can see, it is not necessary to press the key all the way to the bottom for our actions to be registered, which gives us extra speed in all our actions.

The actuation force is nothing more and nothing less than the pressure we will have to exert to press the key to the end, that is to say, to exhaust its maximum travel. While this force is identical in the three types of switches (60gf), we see that the operating force of the Kailh Red and Kailh Brown is 45gf, while in the Blue switches it is 50. This means that to reach the actuation point, we must exert 5gf more pressure in this type of gaming keyboards.

Therefore, we see how the differences, although minimal, exist, and make each type of keyboard more suitable for one scenario or another. If you are going to use your gaming keyboard only for gaming, possibly the Switch Blue is your best choice since it requires more pressure to press the key and its action distance is smaller, so on the one hand you avoid unnecessary clicks but on the other hand you execute your movements before. If you combine your leisure time with work, write as a hobby or any other activity that keeps you typing for hours, you should opt for the Kailh Red or Kailh Brown. The only difference between them is that the Kail Red is linear, while the Brown switch is tactile.

Keys, those great forgotten ones

We often make the mistake of looking only at the type of switches, overlooking the quality of the keys, which is a mistake.
After all, the gaming keyboard key is the part with which we interact directly. Therefore, we must pay special attention to buy a keyboard with quality keys.
It is important to check if they have a sticker or have been laser engraved. The best keyboards use a technique that prints directly on the plastic of the key, so that the symbols are not erased no matter how much you use them.

Being able to change the keys is another of the virtues of these gaming keyboards, since, in addition to allowing you to customize them, you can easily replace worn keys. There are now a multitude of stores specializing in the manufacture of custom keys, you are sure to find one that suits your personality.

If there is one thing that has plagued gamers of multiple generations, it was pressing multiple keys and seeing the gaming keyboard become unresponsive or erratic. This was due to the fact that the previous keyboard panels, when receiving the signal from several keys, mixed it in a bad way to send it to the PC, causing real aberrations in the control of our character.

This ghost effect, or Ghosting, has been corrected and now we can press several keys without any problem. This specification can be found under the nomenclature x-key rollover, being the x the maximum number of keys that we can press simultaneously without causing the keyboard gaming to go crazy. Another time we will focus more on the technical aspects of mechanical keyboards, technologies used in keyboards Newskill, our own software, macros, analysis of each model, etc..