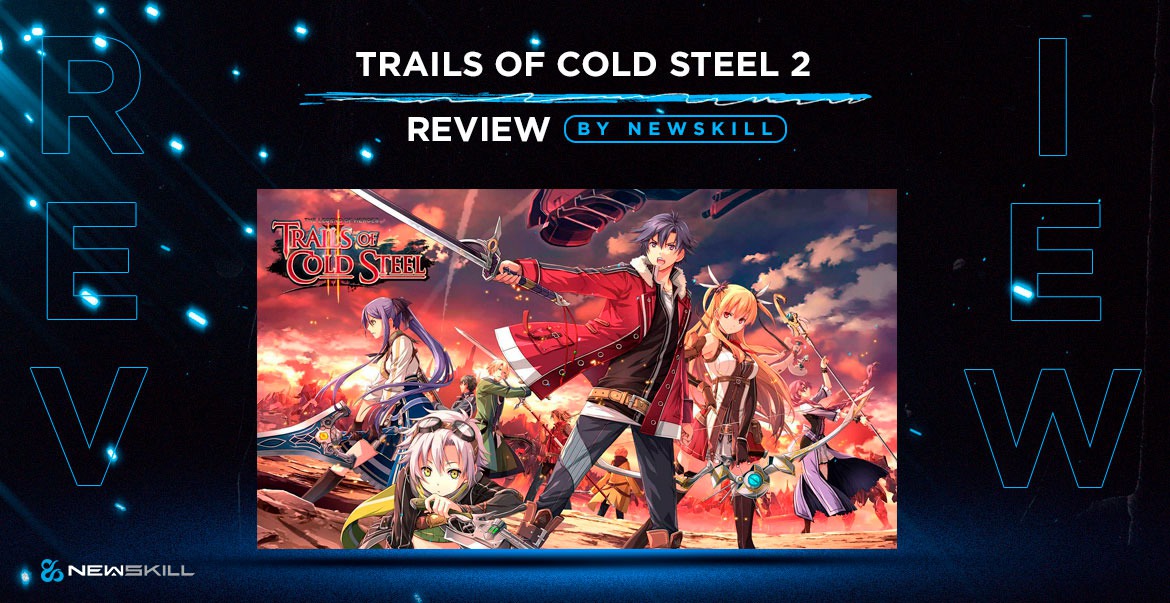 The adventures of Rean Schwarzer are not well known to the general public, but for those JRPG lovers who delved into Erobonia a few years ago, they found an exciting story and characters accompanied by outstanding gameplay. Now Meridiem Games brings us the remastering of The Legend of Heroes: Trails of Cold Steel II, we make ourselves comfortable in our Kuraokami Black and we begin.

As you can imagine, this is the direct sequel to The Legend of Heroes: Trails of Cold Steel and the story of this second part begins a month after what happened in the first part. If you have the opportunity, we recommend starting your adventure with the first part, since this one introduces more characters and delves deeper into its history. This second part, which now comes to us remastered for PS4, the story revolves around this world and its political conflicts. If you do not have the chance to play it, this second part includes, in its options, a fairly extensive summary of the characters and the events that have led to the current situation. 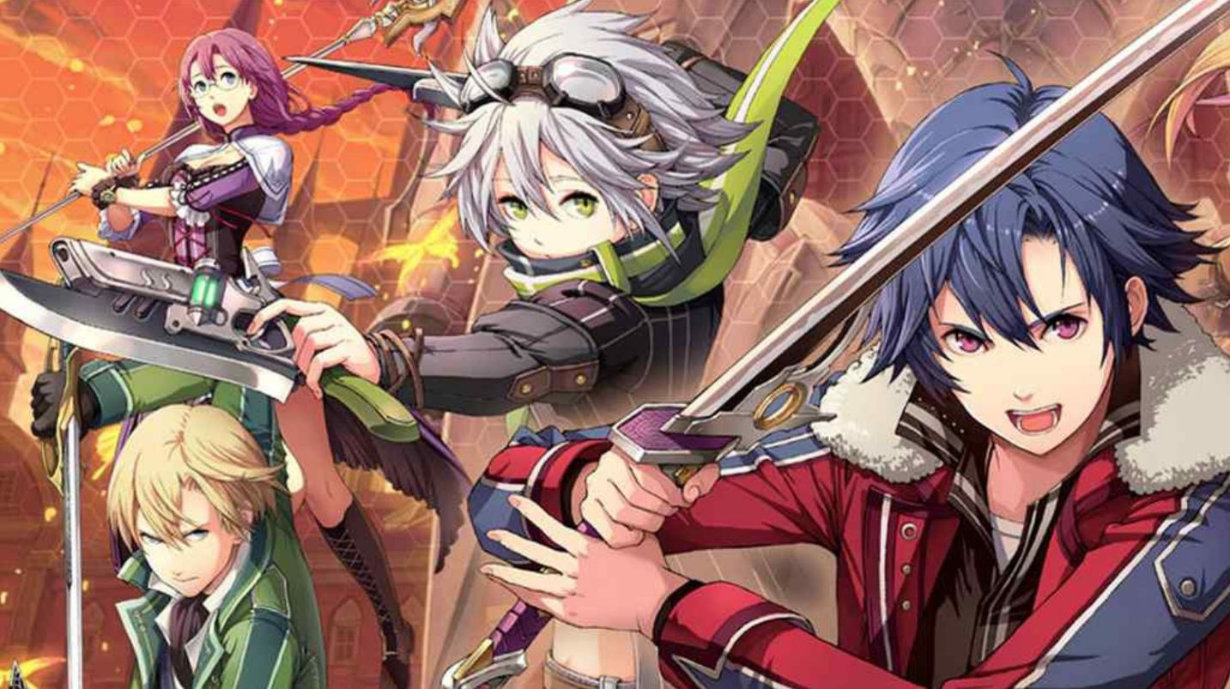 Once the introductions have been made, let's get into our analysis of The Legend of Heroes: Trails of Cold Steel II. One aspect, which was already included in the original version and has been maintained for this remastering, is the cross save option to be able to load our previous games, which will provide us with additional dialogues.

Without going into too much detail on the story, (even though it is a remastering, we will not spoil the story! is no friend of spoilers!) at the start of the game we meet Rean, our protagonist who wakes up in the middle of a mountain and after a series of events that serve as a tutorial, begins to reunite his former classmates of Tharsos class VII with the scenario of a civil war in Erebonia in the background.

As we have already mentioned, many characters repeat in this second part of Trail of Cold Steel, but to this large group are added many other unpublished ones. Far from seeming chaotic with so many characters, the story is very well guided and leaves us with some truly spectacular moments.

This continuist aspect in the story is also reflected in the gameplay, with a very similar base to the one seen in the first part. It is a JRPG with an excellent turn-based combat system, far from the standards of the latest RPGs that were coming to us. Making a reinvention of the turn-based system, it offers us a much more dynamic proposal than the classic formation of enemies in line and the companions in front of us.

One of the tasks to which we will dedicate more time will be to recruit our old companions, both for their high number and their location, since each one will be in a different area of the map. This will give us the most varied situations for the story and will offer us new missions. Once they are in our ranks we will unlock extra features, such as weapons or stores. 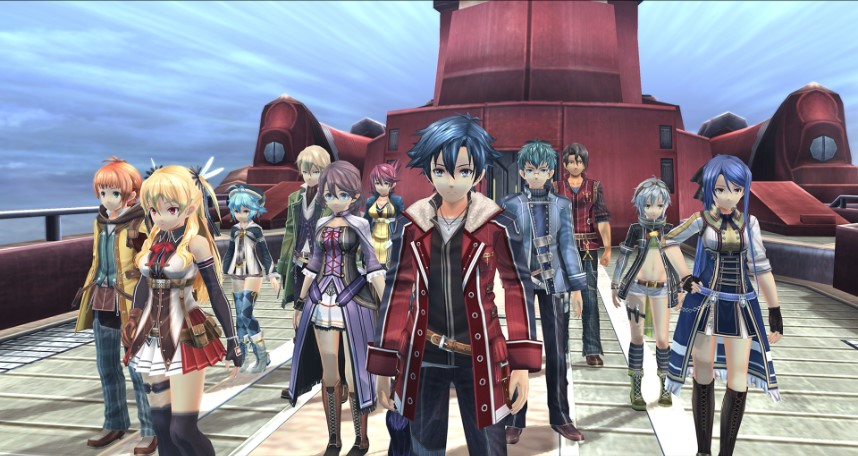 Although the tone of this story is darker than that of its predecessor, some leisure minigames typical in any RPG, such as fishing or cooking, return. In addition, for this second installment they bring back their Blade card game with some modifications and a snowboarding activity that will pleasantly remind us of a classic of the genre. We will also have more presence of trips on horseback or motorcycle.

One of the aspects of the original that we would have liked Meridiem to solve for this remastering is the translation of the texts. If we can enjoy the voices in Japanese or English but we will not have the option to put the texts in Castilian so we will need a good command of English to fully understand the story and sometimes the objectives of the missions that we will have to carry out.

On the other hand they have included 4K support for PS4 Pro and a stable image rate at 60 fps. The sound has also been optimized and they have included turbo mode so we can run at high speed through the scenarios and combat. Of course the loading times have practically disappeared, making the experience much smoother. At the end of this September will come the third installment of this adventure to PS4 so we are convinced that it is a good time to get into this interesting universe. 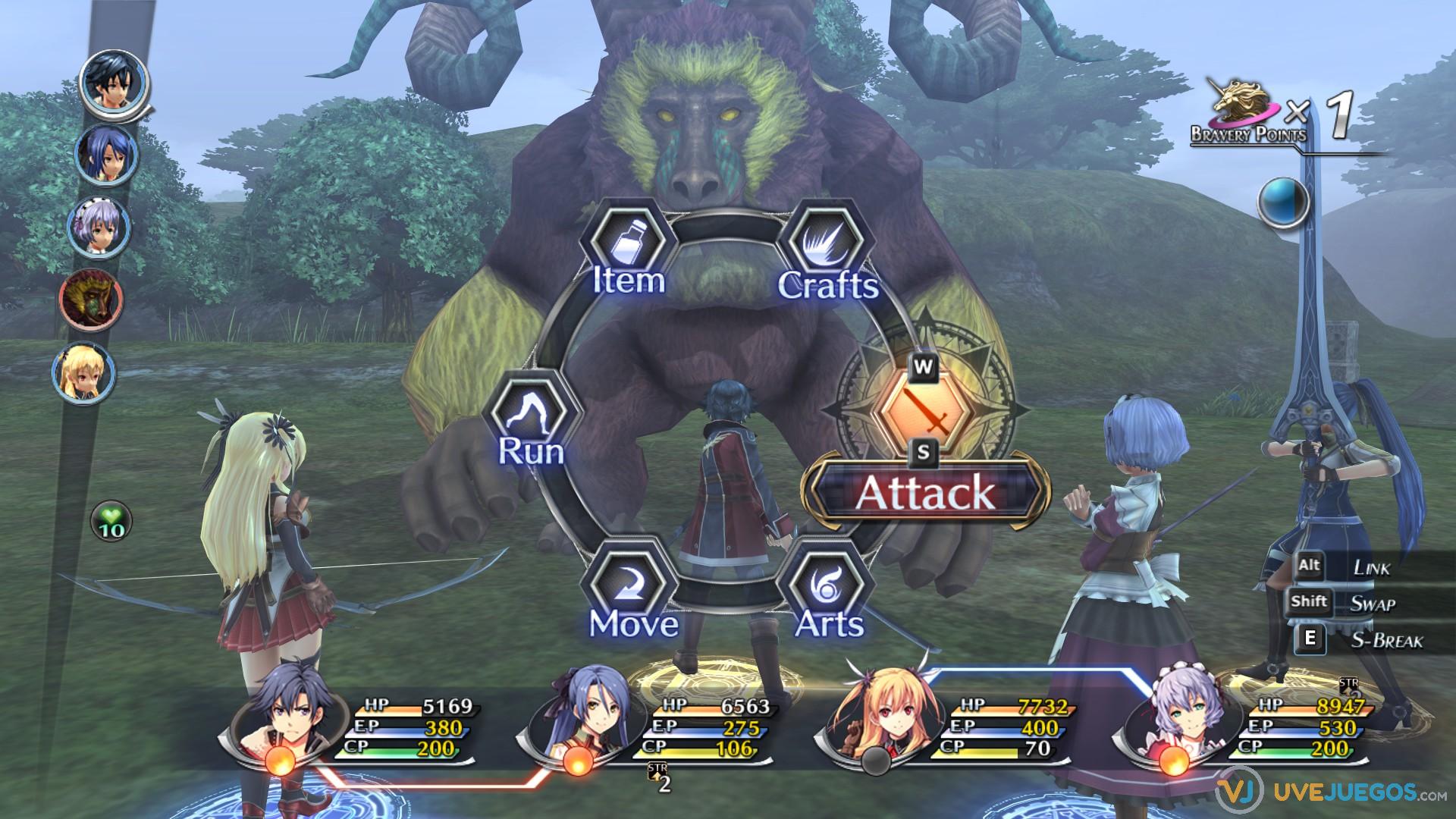 In our analysis of The Legend of Heroes: Trails of Cold Steel II we have been very satisfied with the combat system. This is not limited only to the classic moment of turn-based combat, the strategy to face the enemies begins in the approach to them because if we attack first we will have some advantages and if the enemy surprises us, obviously he will be the one who has the advantage.

At the beginning of the fights we will have the typical options of any RPG such as Attack, objects, flee or the Arts, which are the usual magics. These can be customized through our ARCUS device, linking the magics and improving them. We will start from a master quartz that will define our initial statistics and from there we will have different slots to link the other arts.

Another of our options will be the Craft. These are unique abilities of each character that we can charge when we produce damage or receive it and with which we can unleash a powerful attack that will be of great help against the groups of enemies that we will find.

A great novelty, which was already introduced at the end of the first part, and in this one returns with more strength is the invocation of Valimar, which will lend us a hand against the strongest enemies. When we get at the controls of the Divine Knight, the combat system changes completely and our companions have support functions such as healing magics or altered states that favor combat. 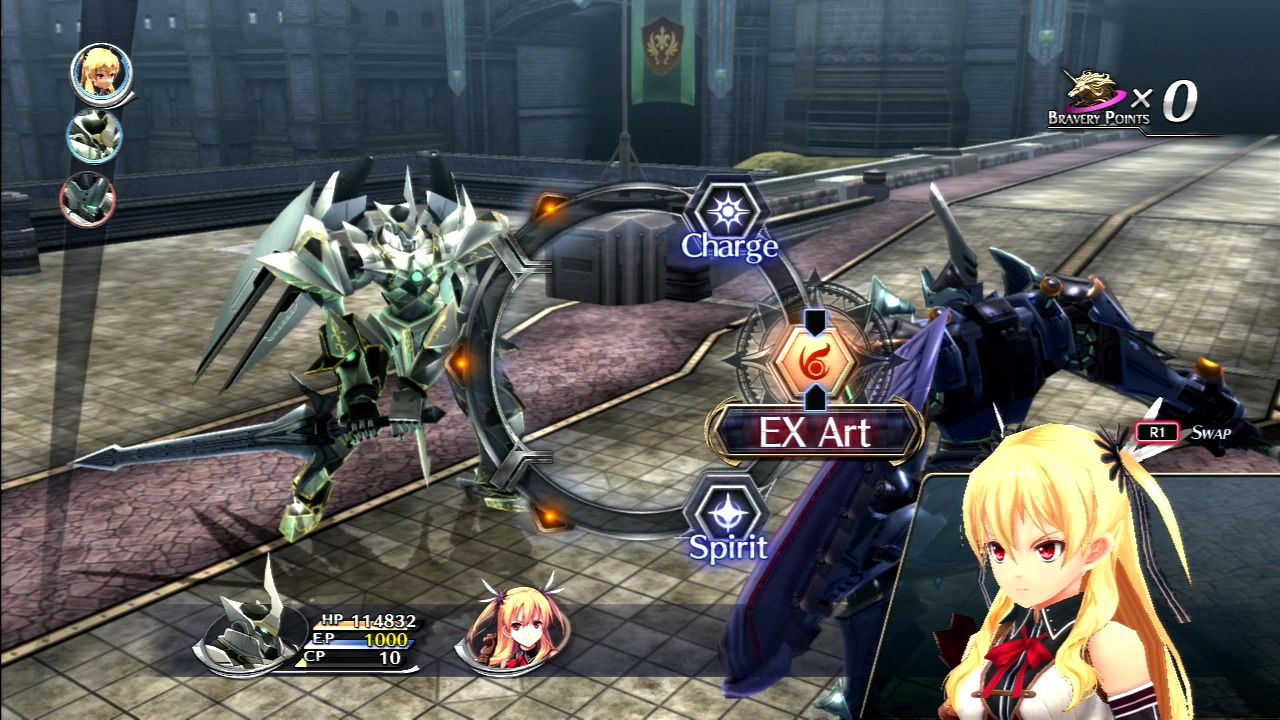 All these combat options contribute to offer us a very fluid and fast system with a great depth due to the number of companions that we can incorporate.

In our analysis of The Legend of Heroes: Trails of Cold Steel II it will not surprise you that the graphics are its weakest point since it is something that drags from its PS3 version but it is not something that will prevent us from enjoying the experience. In addition, its artistic style, very much based on the most classic manga and anime, is a great success. When we begin to explore large scenarios, we will gradually improve our equipment and leveling it up or learning new skills and we will no longer remember the graphics and the game will have managed to catch us fully with its gameplay.

As for the sound, the voices, both in Japanese and English are very well implemented. As we have already mentioned, there are no texts in Spanish, which in our opinion is the biggest negative point that we can put to this remastering because the other sections are really good. The soundtrack accompanies perfectly in every moment and knows when to stand out. There are very varied themes, with some really sublime moments to which we have made the most of with our Kimera V2. 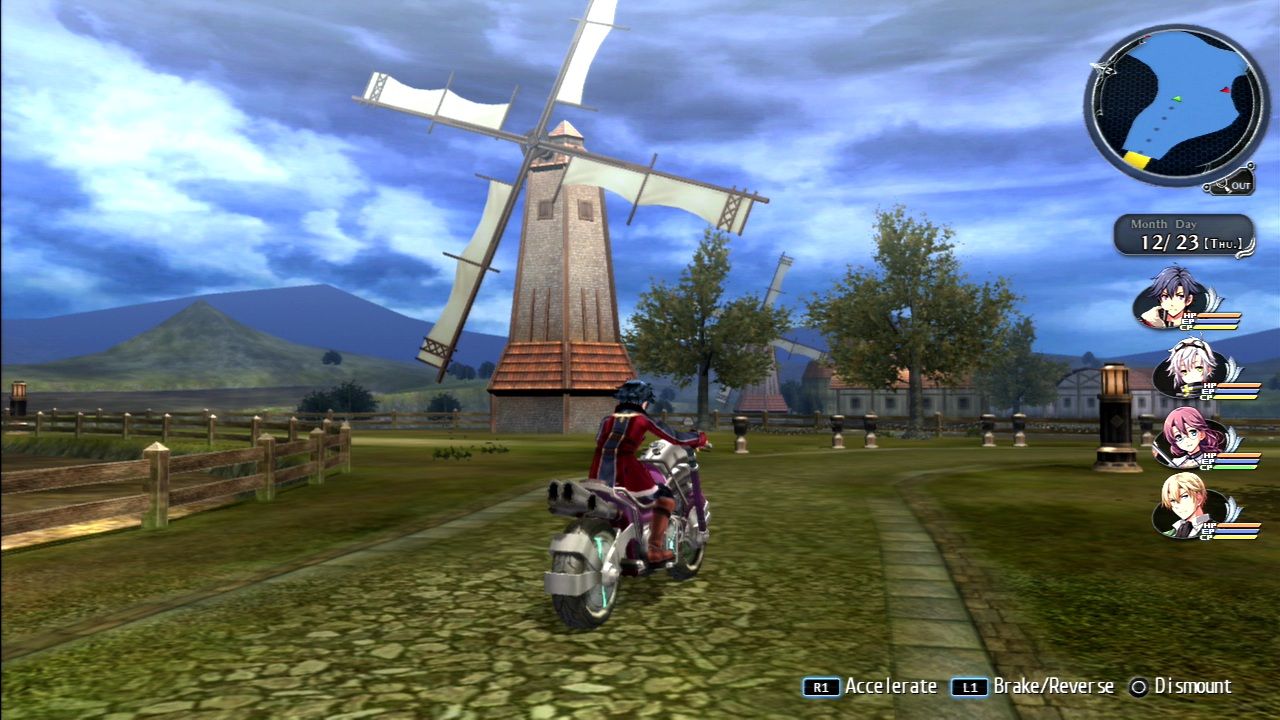 In conclusion to our analysis of The Legend of Heroes: Trails of Cold Steel II we can say that it is a hidden gem that can deal with the great exponents of the genre. Thanks to this remastered brought to us by the guys at Meridiem, it will be able to reach a much wider audience and undoubtedly capture more JRPG lovers who have not yet fallen into its history.