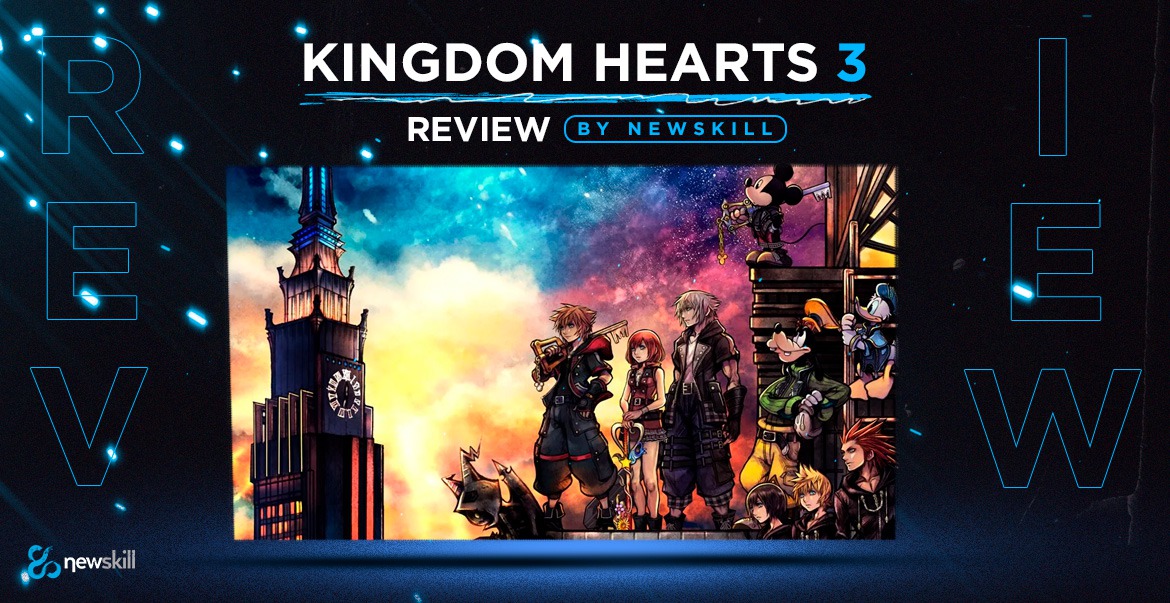 A few days ago, the chicks from Koch Media brought to the offices of a spectacular edition of Kingdom Hearts 3, the long-awaited closure of the story arc that Sora began on Playstation 2 Kuraokami White and we dive, once again, into this spectacular universe to bring you this kingdom Hearts 3 review.

The origin of the story

It was the year 2002 and Squaresoft presented its latest games, (shortly after it would merge with Enix to create the current Square Enix) among them was Kingdom Hearts that had a young Tetsuya Nomura for the first time in charge of directing a game. A main approach that at that time surprised and generated doubts in equal measure. We put ourselves in the shoes of Sora, a character taken from the most classic anime and we traveled through Disney worlds accompanied by Donald and Goofy while we crossed paths with the most iconic characters of the Final Fantasy saga. The game was a resounding success and now, 10 games and 17 years later we are facing the closure of this story.

Kingdom Hearts has become in its own right one of the most beloved, magical and unique sagas that this industry has given, since its creation we have had the opportunity to fight against darkness throughout many worlds, live adventures with characters as different as Simba, Winnie the Pooh, Captain Jack Sparrow himself or support Squall's resistance in Hollow Bastion. All these situations have given rise to one of the most convoluted video game stories, full of mysteries and situations that have managed to keep us glued to the screen installment after installment. 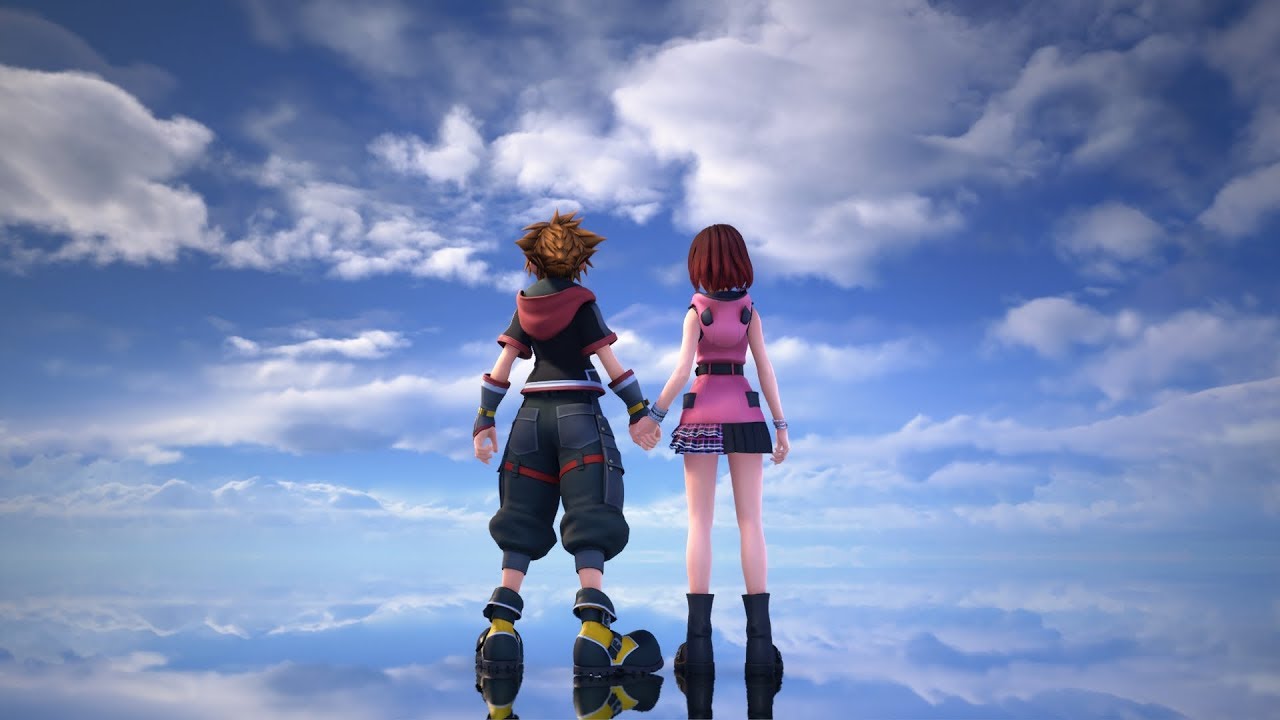 In this third numbered installment of the series we start right after what happened in Kingdom Hearts: Dream Drop Distance and Kingdom Hearts 0.2: Birth By Sleep A Fragmentary Passage. After being practically possessed by Xehanort, the great villain of this saga, Sora has lost his powers and must recover them, which leaves us an ideal starting point to begin our adventure and to be able to tell you our kingdom Hearts 3 review. After traveling to Olympus, a story is unleashed with a very fast pace, full of surprises and the occasional twist of script in charge of finalizing and tying up all the loose ends that have been generated with successive deliveries and that have surprised us quite a lot.

There has been a lot of discussion about whether it is necessary to have played the previous installments of the saga to enjoy this final chapter. The game gives you the opportunity, through various documents, to tell you the most necessary and throughout the game you are reminded of certain aspects and past events to put into context all those who are going into the game for the first time to fight against the heartless. Returning to the initial question, the answer would be that it is very enjoyable as a game thanks to all its platforming and combat system but to understand all the winks and twists of the script is necessary to know the story more thoroughly. 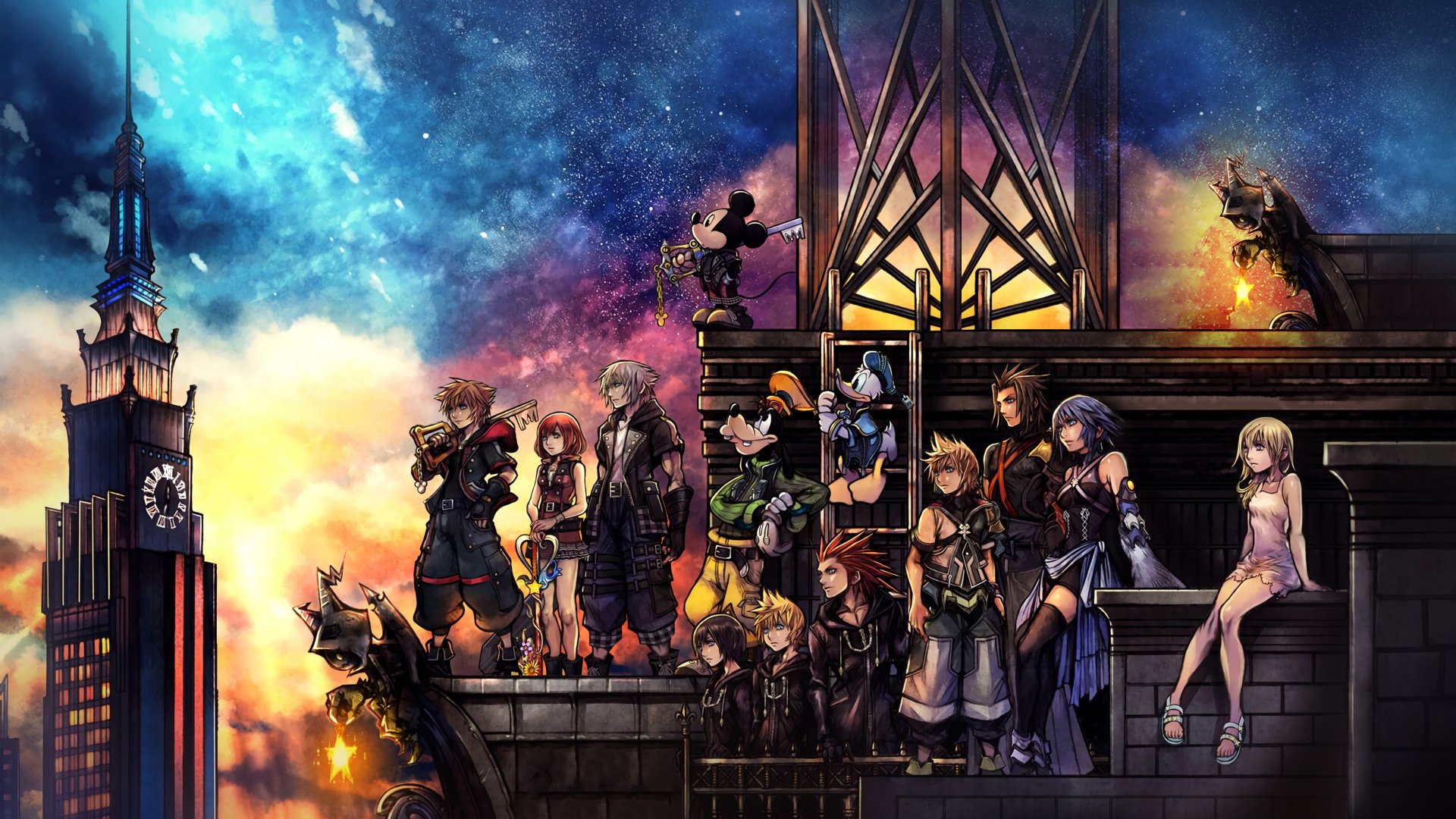 Although the scheme is the same in each world, we arrive, we are presented with the situation and the problem, we face the heartless or disembodied and its final boss, Kingdom Hearts 3 manages to keep the excitement in each of them thanks to the wide variety of situations that introduces. This is thanks to the design of the scenarios and Disney worlds recreated in a superb way, enhancing the aspects that make them unique and taking advantage of the skills of our protagonist. In this new installment we find the largest maps to date in the saga and with very few loading screens between scenarios, making that although this is the installment with fewer worlds we do not miss more.

All these aspects stand out on their own, but in addition, the story of Sora, Donald and Goofy is much more integrated into what we live within each Disney world, the plot in each of these locations keeps the overall story alive and keeps the interest alive. All video sequences have a detail and care that make it clear who is behind the development of this game.

Being the final chapter, it has the titanic task of closing many plots, which translates into many video sequences. This is a double-edged sword, since on the one hand the level of detail and mastery of these manage to catch you and make you think you're in front of a new Disney or Pixar movie, but on the other hand, the gameplay is so powerful that you want to be given freedom as soon as possible to continue getting lost in San Fransokyo, to give one of the many examples. It's a tricky balance that they've managed to adjust quite satisfactorily in most situations. 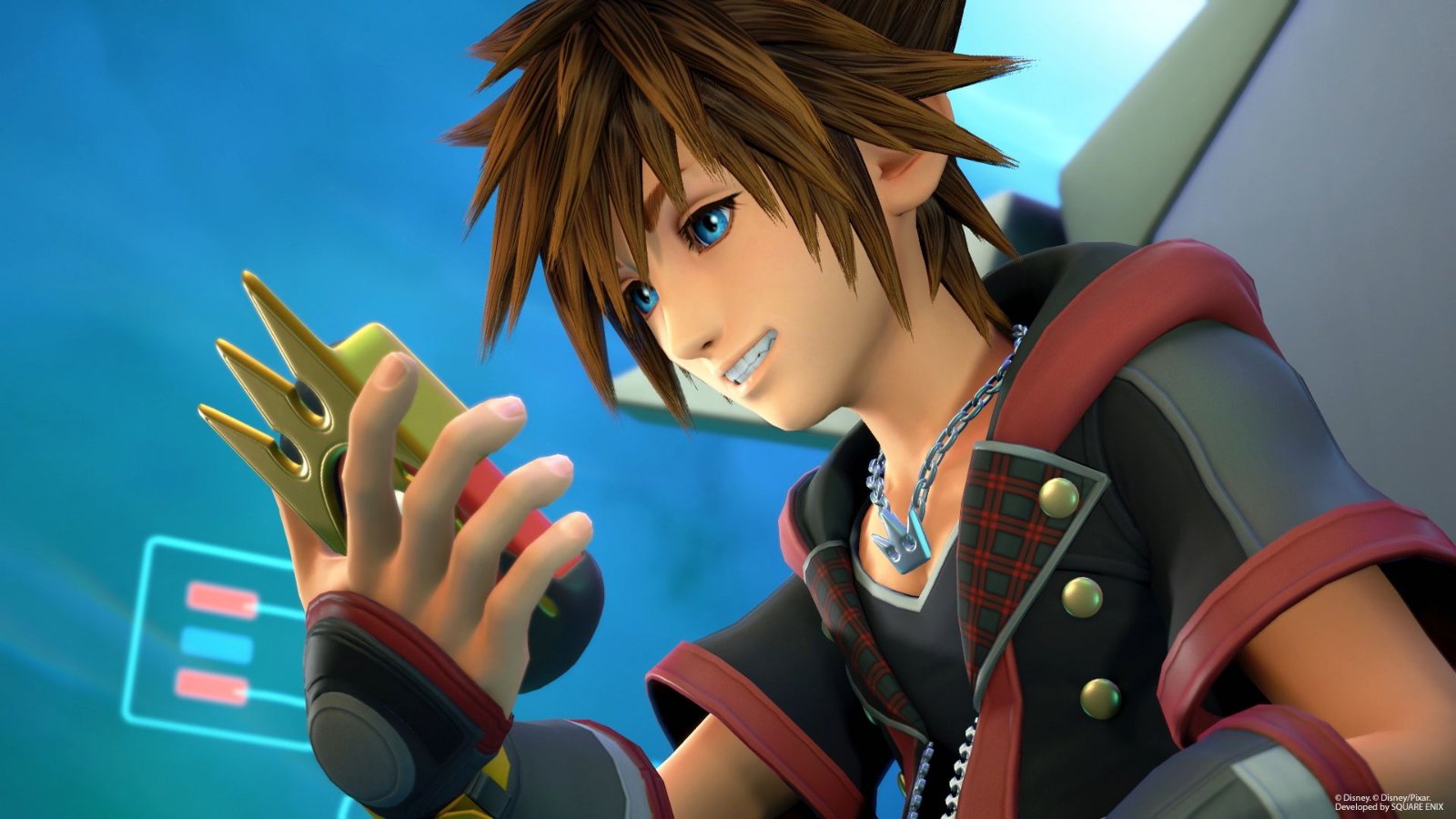 The level design accuses the long development that Kingdom Hearts 3 has had and we notice it in some worlds with mechanics that we saw in games of the last generation and that contrasts with others in which we have much more freedom, we can find ourselves sailing through the Caribbean in the purest Assassin's Creed Black Flag style or performing mini-games typical of mobile devices.

The spectacular nature of the Sword Key

The gameplay, as we mentioned before, is a delight, from the simple running movement of Sora, to the linked combos of the multiple combats that we will find and that we will have to overcome to advance through the different worlds. We already know the base, with our sword key we can attack and launch our magics, we will have another button to dodge or block and the objects section. But in this edition we are faced with the most polished and spectacular battle system to date, there will be times during combat that we will not know what is happening and the camera returns to do some of his own but is much more optimized than in past games.

The great addition in this Kingdom Hearts 3 for combat is the possibility of equipping up to 3 different sword keys, each with its transformations and special attacks that give greater depth to combat, being able to transform into spears or a pair of giant yoyos. Now you can switch between them simply from the direction pad, if you want to cast a more powerful spell equip one that has a higher magic attribute, throw your devastating Electro++ and switch back to continue wreaking havoc to melee.

The aspect of combat that has also undergone a great improvement are the summons, now they are really useful and very different from each other, with their own mechanics. Iconic Disneyland attractions have also been included during combat. This aspect is the one that least convinced us of the combat, enemies will appear with a green mark and if we manage to hit them before it disappears, we will be enabled the option to unleash an attraction. This is completely random among the 5 that are available and we believe that some of them break the dynamics of the combat a little, besides that advanced in the story they lose much effectiveness.

The last aspect of the gameplay that has undergone a more striking change are the sections with our Gumi ship. Now we find small open worlds in which we can fight against other ships in the style of classic space battle games or collect pieces to improve our ship in the editor as if it were a LEGO.

A noteworthy aspect, once again in the saga, and one that we could not overlook in our kingdom Hearts analysis, is its sound section. From completely original pieces to variations on classic Disney themes, Yoko Shimomura's work is outstanding. It's really hard to go through the world of Toy Story with our Kimera and not go around humming "There's a friend in me", even long after having left this world behind. On the other hand, it once again features well-known actors for its English version, including in many cases the original voices from the Disney movies. 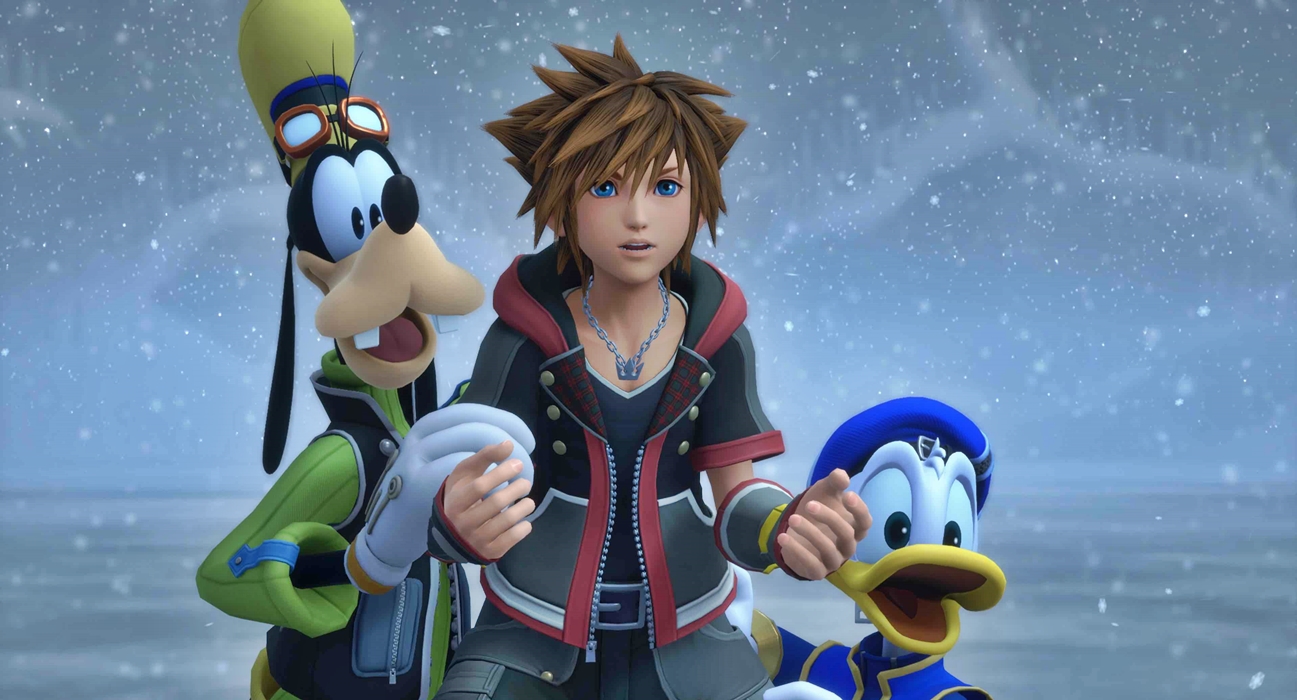 This closure of the saga has seemed to us an outstanding game. It was very difficult to satisfy the hype of so many years of waiting, but no doubt Square Enix have been able to devote the necessary time, take things slowly and launch a product with a level of detail and gameplay to live up to expectations and that as is clear from this kingdom Hearts 3 review at we loved it and we are looking forward to live new adventures in this universe created by the guys from Square Enix.

We have been able to perform this review on a PS4 thanks to a press kit provided by Koch Media.